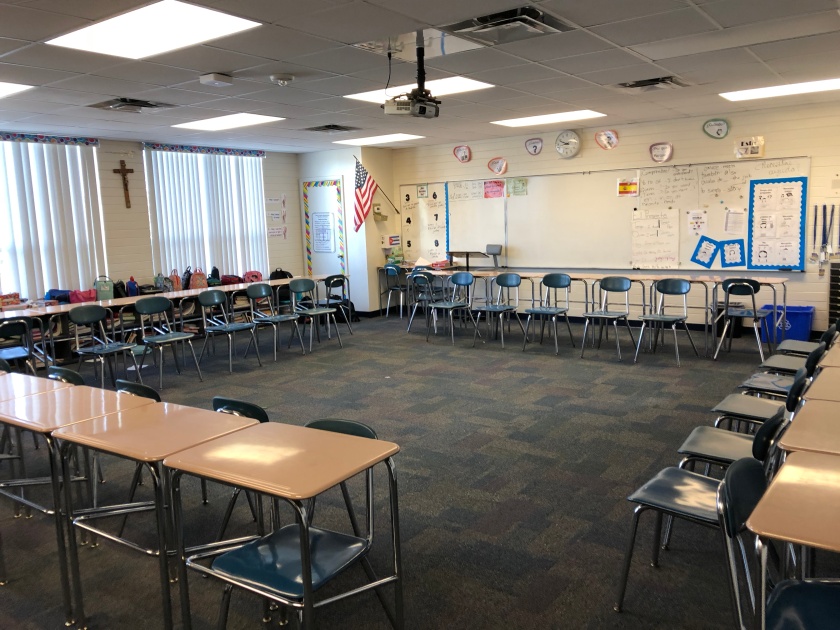 This has been a rough year filled with family emergencies, sicknesses, a hurricane…I haven’t had my head in the right space for teaching for a few months now. I have been in a funk for a lot of the year, feeling uninspired

and underwhelming as a teacher.

Fortunately, though, the fog is lifting; sicknesses are resolved, grieving is easier to manage, and I’m ready to get my head back in the game. I don’t want to be underwhelming, I want to whelm!!!

So what’s new since I last talked to everyone?

There are two big changes that I have made in my classroom in the new year that have forced me to get out of my funk and be at the top of my game.

The first is going Deskless in my classroom.

I wanted to try deskless at the beginning of the year, but I couldn’t figure out how to find space: I am not able to actually get rid of my desks, and I have to have 30 of them!

Management is the only real issue as the students have a lot more freedom with no desks in front of them (psychologically and physically). Overall, though, it is positive and they don’t talk any more than they did when they had desks in between them, so…I’ll call that a win.

The biggest benefit of going deskless is that I have to step up my own game. With all the opportunity for getting off task, the students need to be very engaged: I need to keep them mobile, writing, speaking, or discussing story/character elements. If there is any whiff of downtime, I will lose them. I am able to get them back, but I can say it’s much easier to not lose them in the first place.

Thanks to all the people who have posted about going #deskless for all the inspiration and helpful tips!

Similar to shifting to a deskless classroom, the second big change is something else I had always wanted to try but couldn’t quite work out. I had always wanted to try Bryce Hedstrom’s Persona Especial activity, but never had. But seeing as this is a time of finding a renewed sense of excitement in teaching and after finding so many amazing resources online for using it, I decided to give it a go.

My curriculum for my outgoing 8th graders was based on things I had done in the past, but after working with them with TPRS for so long, those old grammar- and vocabulary-based activities and units were falling flat. Being a department of 1 means that I have a bit more freedom than most to change the order of the curriculum map (or change it entirely). The things I had planned to do at the beginning of the year just weren’t working for me or for the students. There was little to no communicative value and definitely no intrinsic motivation like there is with student-led stories (even the boring ones that the students are sick of are better than the lessons and units I was dusting off and using).

This year, Persona Especial is only rolling out in 8th grade and 4th this year. 8th grade gets much more in-depth with the details about each person because can handle the extra questions and because they like to play around, so rather than stamping out their creativity, I am trying to foster it in ways that are beneficial to their acquisition of Spanish. 4th grade is getting a very basic version of Persona Especial right now, with the idea that once we get through all the students at the basic level, they will have had enough time with the content that it is pretty well acquired and we can add to it in later years. By the time these 4th graders are in 8th grade, who knows the things they’ll be able to accomplish in the TL.

The big lesson: Keeping it varied and saying No

As I have stated in this blog many times before, once things get stale, the students tune out. So rather than lean hard on one type of activity for many weeks, which is what I would have done in the past, I am making sure to leave them wanting more. This means saying no to doing an activity more than once or saying no to doing it for an entire class period. As I tell the kids, “Ice cream for dinner is great, but ice cream for dinner every night is a punishment.” Too much of a good thing makes them sick of it and I want to be able to use this activity for years and years as they grow older.

I will add more as the year goes on and I try even more of the things that I plan to add to my teaching repertoire this year.

The place to learn about doing webinars

Teaching foreign languages with Comprehensible Input (CI)... and other ramblings.

An EdTech Approach to a TPRS World