These kids, man, these amazing kids: They are capable of doing some amazing things when they get the opportunity.

I have taught one particular class and this group has always been problematic for me in behavior and in motivation. I met these kids when they, and I, were young. I was brand new, a baby teacher who didn’t know his backside from a hole in the ground. I couldn’t tell you why I taught what I was teaching and I couldn’t tell you what I was going to teach next because I was flying by the seat of my pants. The kids, at least this group, were not aware of this and they were having fun learning about their colors and descriptive adjectives and the other things I taught them.

The next year, I started to explicitly teach grammar, which turned a lot of them off. One kid said to me, “This is just like English class, but in Spanish.” I didn’t really know what to say. I disagreed, I said, “No, this is how you learn Spanish.” Oh, how naive I was.

(Side note, at the time, I disagreed because I thought that he was wrong about my class being just like English class. In retrospect, I still disagree, but not because it was like English class, I disagree because almost nothing I did with them while teaching grammar was actually being done in Spanish).

Luckily for me, I attended a TPRS workshop with the incredible Donna Tatum-Johns, who had me retelling a story in French after an hour of instruction. I was hooked. I was excited to try it in my classes.

I started with it on the first day. Right after going over the rules (which have been the same since I started), I gave instructions on reacting to the stories and answering questions. They were intrigued to see what I was up to; I was nervous.

I started telling a story. I made it up as I went along, it ended up being about Cristiano Ronaldo wanting a Ferrari. It was quick and it was not that great, I’m sure, but it was fun and the kids were hooked. Kids that have rolled their eyes at everything I’ve said in the classroom for years were engaged and participating.

Then came the real stories. I currently use the first book in the “Look, I Can Talk” series by Blaine Ray. The kids enjoy the stories (although, about half way through the first chapter, they started to get sick of people wanting, but not having, cats–we started to change things up with the animals, which only engaged them more because the stories became their own) and they answer the questions.

Now to the writing.

After the first embedded reading, I had the students write a story similar to what they read. They could write it about anything they wanted. The original extended reading, from Look, I Can Talk by Blaine Ray: 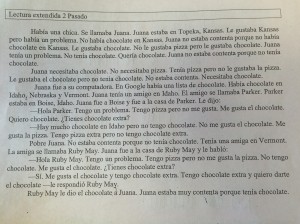 Some of the students just wrote the story on the other side of the paper word for word, changing only the names, places, and items wanted by the characters. Others, though, were more adventurous. Their goal was to write 50 words. It was a way for me to just see what they could do. Most of the papers I got back had much more than 50 words, some almost reaching 100.

Now, to be fair, I do think that this group, since they are older than most of the others, has an advantage over the younger grades because they have had more experience with the language. I do know that one younger group, when they tried to do the same type of writing assignment, were not able to write as much or as accurately as this group. It’s all an experiment right now, trying to figure who is capable of what.

I definitely know that this group can write. They can write so well. See an example: 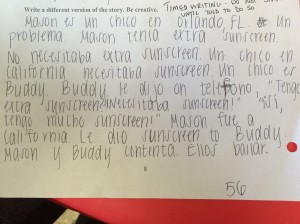 This example is one of my favorites: the girl who wrote it, even though she made little errors, chose to write from the perspective of the character who had something extra to give away, rather than a character who wanted a particular thing. We had never looked at the story from that perspective. When I read it, I was completely blown away and amazed. As I said, there are spelling and grammar errors, but this is after just 4 or 5 TPRS classes and 2 stories asked and read in class.

That’s the great thing about this method: allows students to get past the worrying about perfect grammar and spelling. Instead, they are free to focus on getting a message across to the reader/listener.